Media Malpractice in the Sandusky Scandal: Laziness or Collusion?

A local reporter got the facts wrong about the janitor's trial testimony.  Was he lazy or was he colluding with the OAG to perpetuate the false narrative about Penn State enabling Sandusky's crimes?

While performing some research for my upcoming reports, I ran across a Centre Daily Times article by Mike Dawson that had some of the facts wrong about the trial testimony of Ronald Petrosky.

(I let Mr. Dawson know what I'd found-- I've yet to hear back from him)  Update:  Mr. Dawson contacted me and agreed that Petrosky could not have read what he said he did in the CDT.  Mr. Dawson also identified testimony problems of the police (Rossman) and of John McQueary.

Petrosky was the hearsay witness who testified about the 2000 shower incident where another janitor, James Calhoun, observed Sandusky performing oral sex on a young boy.

The CDT's Account said this:
-- the upper bodies of Sandusky and the child were blocked by a curtain
-- Calhoun came up to Petrosky to report the incident
-- Petrosky said he called authorities after seeing a story about Sandusky published in the CDT

Maybe Mike Dawson was confusing Petrosky's grand jury testimony with his trial testimony.  At the grand jury, Petrosky said he could only see legs because of an obstruction.  At trial, he said he could only see legs because he was looking down.  Thank goodness Mike didn't attempt to say where the crime occurred, because he may have again cited the grand jury version (Asst Coaches Locker Room) instead of the trial version (Staff Locker Room).

But everbody gets one  "mulligan" when they testify, right?

One would think that a reporter on top of his game - like Mr. Dawson - would have made a note to fact check Petrosky's statement about calling the police after reading "about the grad student" in the Centre Daily Times.  Petrosky's testimony follows: 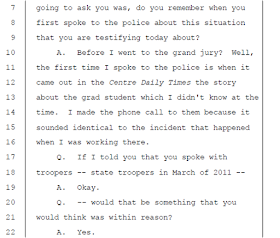 A search of the CDT reveals that no articles concerning the grad assistant/McQueary appeared there until November 2011.  Petrosky testified he read about it in March 2011 -- before Sara Ganim broke the news of the Sandusky grand jury.   It would be reasonable to conclude that Petrosky "got it wrong" about how he found out about the incident.

Wouldn't this enterprising reporter -- Mike Dawson -- want to know how Petrosky got this wrong?

(No, not when your job is to cover for the folks in Harrisburg and in Old Main)

So, how did he find out?  Enter, Anthony Sassano.

Agent Sassano stated that once the investigators found out about McQueary, they "brainstormed" about who else might know and came up with the idea to talk to the janitors.  The OAG subpoenaed (Grand Jury Subpoena 191) PSU for the lists of janitors names on May 11, 2011.  You can read Agent Sassano's trial testimony below and see that he "got it wrong" too -- the dates don't line up for him either. 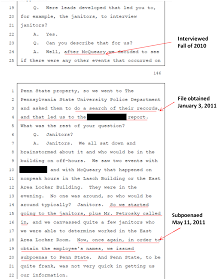 -- Petrosky talked to the police in March 2011 (after reading the CDT column).

-- The list of Physical Plant Employees was subpoenaed in May 2011.

There's a lot of mistakes in the testimony of Sassano and Petrosky.  Everything you've just read is on the public record.  Mike Dawson has access to this information just as much as anyone else does.  Is he too lazy to look it up?

One would think reporting suspected perjury by two more witnesses in the Sandusky case would be newsworthy.

It could mean a mistrial and Sandusky's release from jail -- and a firestorm the likes people haven't seen in a long time.  That storm would engulf the attorney general's office and turn this scandal upside down.

It's clear that the Centre Daily Times doesn't want to do anything to rock the boat and challenge the narratives emanating from Harrisburg and Old Main.

They too have decided "moving forward" (covering up) is more important than finding the truth.